During his 20 years as a professional musician, bassist and cellist Svante Söderqvist has made himself known as one of Sweden's foremost jazz bassists. Over the years, he has worked and recorded records with a wide range of Swedish jazz artists and musicians, including Rigmor Gustafsson, Margareta Bengtson, Nils Landgren, Magnus Lindgren, Claes Jansson, Carin Lundin, Joakim Milder, Mathias Algotsson, Klas Lindquist and others. In addition, he has been employed as a jazz musician at Estrad Norr in Jämtland and participated in musical theater performances at Kulturhuset Stadsteatern in Stockholm and at Uppsala Stadsteater.

In 2018, the first own group, the Svante Söderqvist Trio, was started, and in addition to the double bass, he also plays his original main instrument, the cello, here to a great extent. With him are longtime colleagues Adam Forkelid and Calle Rasmusson on piano and drums/percussion, respectively. The trio has played together in many different constellations over many years, which means that the group is very coordinated.

The music is mainly composed by Söderqvist, with a clear melodic and rhythmic starting point and with elements in addition to jazz from both folk music and classical music. Both Forkelid and Rasmusson make a big creative mark in the shaping of the music through dazzling musicality and playing skill. By using strings on both double bass and cello and also singing, Söderqvist creates a multifaceted solo expression, which makes the jazz trio format feel both varied and innovative. In March 2020, the debut album Arrival was released on the record label Prophone/Naxos, and the record has been received extremely well by both reviewers and audiences. 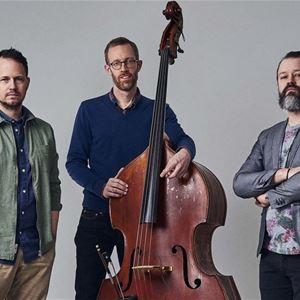 View on the map

Build: 9/29/2022 6:06:35 PM, Host: online3core18, DB: o3.cbguide-4063.cbischannel-135.v1 online3data04.db.citybreak.com:8080, Controller: Event, Action: showdetails
Visit Östersund uses cookies to give you the best possible experience.
If you click on accept, you accept our cookies. If you choose to block, you will not be able to use all the functions on the page.

This website uses cookies to improve your experience while you navigate through the website. Out of these cookies, the cookies that are categorized as necessary are stored on your browser as they are essential for the working of basic functionalities of the website. We also use third-party cookies that help us analyze and understand how you use this website. These cookies will be stored in your browser only with your consent. You also have the option to opt-out of these cookies. But opting out of some of these cookies may have an effect on your browsing experience.
Nödvändiga Always Enabled
Necessary cookies are absolutely essential for the website to function properly. This category only includes cookies that ensures basic functionalities and security features of the website. These cookies do not store any personal information.
Icke-nödvändigt
All cookies that may not be particularly necessary for the website to function and that are used specifically to collect users' personal data via analyzes, advertisements, other embedded content are referred to as non-necessary cookies. It is mandatory to obtain user consent before these cookies are run on your website.
SAVE & ACCEPT