Exhibition - THE CABINET, Helen Smith - WHERE?

The CABINET at Busstorget shows the exhibition WHERE? by Helen Smith.

About the exhibition:
Fragments of salvaged linoleum flooring and industrial packing foam are patched together with blanket stitch of brightly coloured twine to form a ‘geological landscape’.

The lino, purloined from a long-neglected Victorian terraced house, formed fusty, dank layers in every room. Pulling up the lino uncovered layer-upon layer of stratified cultural and natural debris, forming an archaeology of time and site. Between each layer, an underlay of brown-tinged newspapers from the 1940s, 50s, and 60s established a timeline of domestic and political events. Pathways etched into the lino, trace out routes and networks of movement across the domestic space.

Venturing out after quarantine, our homes, spaces of refuge and confinement fold out into the wider public environment and ‘spaces of defamiliarisation’: shopping malls; transit hubs, and gathering places. The artwork asks directly “Where have you been? Where are you going?” prompting the viewer to reflect in order to understand what has been, and to contemplate new and different perspectives

ABOUT THE ARTIST
Helen Smith is an artist living and working in London, UK. She utilises a variety of mediums including drawing and painting, video, sculpture, and found objects. The outcome of which is large-scale mixed media constructions and interventions. She has exhibited widely including Love and Loss curated by Tate Collective at Tate Modern (2022), Harry Pye’s RA Show, The Front Room Gallery, Ramsgate (2021), Neither Here Nor There, The Stables: Morden Hall Park (2013), and Michael Shamberg’s Turtle Archive: Image/Text/Music, Slade Research Centre (2007). 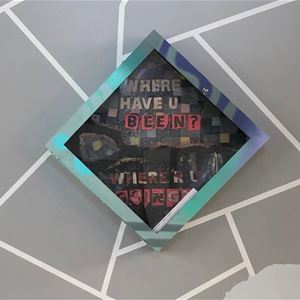 Build: 9/21/2022 6:36:07 PM, Host: online3core17, DB: o3.cbguide-4063.cbischannel-135.v1 online3data04.db.citybreak.com:8080, Controller: Event, Action: showdetails
Visit Östersund uses cookies to give you the best possible experience.
If you click on accept, you accept our cookies. If you choose to block, you will not be able to use all the functions on the page.

This website uses cookies to improve your experience while you navigate through the website. Out of these cookies, the cookies that are categorized as necessary are stored on your browser as they are essential for the working of basic functionalities of the website. We also use third-party cookies that help us analyze and understand how you use this website. These cookies will be stored in your browser only with your consent. You also have the option to opt-out of these cookies. But opting out of some of these cookies may have an effect on your browsing experience.
Nödvändiga Always Enabled
Necessary cookies are absolutely essential for the website to function properly. This category only includes cookies that ensures basic functionalities and security features of the website. These cookies do not store any personal information.
Icke-nödvändigt
All cookies that may not be particularly necessary for the website to function and that are used specifically to collect users' personal data via analyzes, advertisements, other embedded content are referred to as non-necessary cookies. It is mandatory to obtain user consent before these cookies are run on your website.
SAVE & ACCEPT